Single neurons are driven by huge populations of synapses. In the visual system, single neurons are highly selective for features in the world (often in an invariant manner). In carnivores and primates, a tremendous amount of visual selectivity emerges in the primary visual cortex. This project aims to understand how selectivity emerges in single neurons; how synaptic inputs are transformed into somatic outputs (i.e. spikes). This project uses in vivo multiphoton calcium imaging of synaptic networks on single pyramidal cortical neurons, taking advantage of dendritic spines which are major site of excitatory input innervation. Understanding input/output transformations in single neurons in the visual system will provide much needed insight into the nature of neural computation.

2. Probing the behavior of visual circuits in action

Each neuron’s population of presynaptic partners determines how incoming information is processed. A majority of synaptic inputs originate from local networks through horizontal (recurrent) connections. Theoretical models of the visual system suggest these inputs perform a fundamental function in cortical circuits: selective modulation. Specifically, selective amplification or attenuation in a manner dependent on the strength and statistics of incoming sensory information. But this process has not been elucidated at the synaptic level, and the mechanisms proposed by stem from studies of rodents and have not been tested in different mammalian systems. This project aims to map presynaptic excitatory and inhibitory cells of single layer 2/3 neurons and dissect how they act to selectively modulate the behavior of neural circuits in a carnivore. This project utilizes a combination of in vivo multiphoton optogenetic neural control, multiphoton calcium imaging, and intracellular electrophysiology.

Synaptic pathology is a prominent feature of autism spectrum disorders (ASD). Synaptic dysfunction is presumed to be an underlying cause of ASD, as genomic studies have identified risk genes regulating synaptic structure and physiology. One gene strongly associated with ASD and other CNS disorders is Phosphatase and tensin homolog located on chromosome 10 (Pten). But while global mouse models with dysfunctional Pten exhibit synaptic pathology and mimic ASD symptoms, it is unknown how synaptic integration, organization, and function are impacted within individual neurons. This project aims to understand how Pten signaling shapes synaptic integration and functional architecture in single neurons. This collaborative project uses CRISPR/Cas9 edits in single neurons in combination with in vivo synaptic calcium imaging measurements. 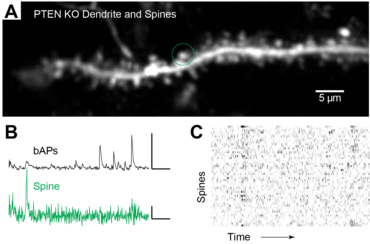 Our lab has access to rich 3D CLEM (correlative light and electron microscopy) datasets (see Scholl et al. 2021). Many features are annotated (reconstructed and labeled), ripe for analysis. Other features can be annotated and processed for analysis to answer new questions.

Synapses are inherently stochastic (by their vary nature and when driven by sensory stimuli). How does synaptic variability relate to input/output transformations? This project will utilize in vivo data to underestand how synaptic variability impacts neural computation.

This collaborative project involves analyzing novel datasets which capture molecular dynamics of proteins like CREB and neural activity in the same cells in living animals. This project will answer questions about how molecular signaling and neural activity are directly correlated and impact one another.

Synaptic populations provide another avenue to understanding the dynamics and complicated nature of neural dynamics. This project will use a variety of theoretical and computational tools applied to synaptic networks measured in vivo.

1. Following the development of synaptic networks

2.Hunting behaviors of a true carnivore

3. Visual processing in action in a true carnivore

4. Molecular interrogation of synaptic network development in a carnivore